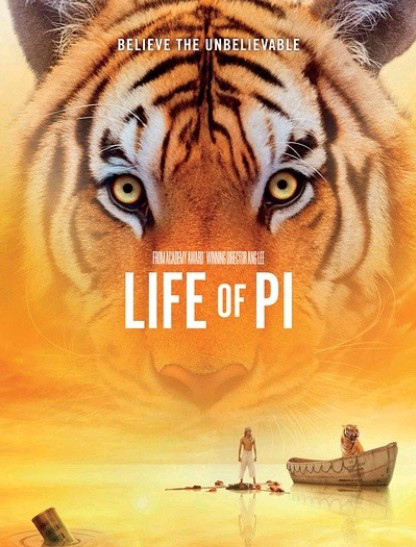 Life of Pi is adapted from a famous novel in the same name, written by Yann Martel. The storyline revolves around a 17-year old boy, Piscine Molitor'Pi' Patel’s adventurous journey on the Pacific Ocean. He survives a shipwreck in which his family dies, and is stranded on a lifeboat with a Bengal tiger named Richard Parker. When Pi’s family move to Canada, the cargo ship sunk in the midway and his families died in the accident. In the first three days on the lifeboat, the surviving hyena killed the zebra and the orangutan, and then Richard Parker killed the hyena. Then, the story between Pi and the tiger began. Finally, Pi was rescued but Richard Parker left.

Audiences argue greatly heat about the ending of the film, and everyone wants to the true ending but Ann Lee doesn’t give a clear answer but says he leaves the ending to audiences. Life of Pi became a critical and commercial success, earning over 583 million dollars worldwide. At the 85th Academy Awards, it wins four awards from eleven nominations, including Best Director.

Hebei Haijie Modern Educational Equipment Co., Ltd., often organizes and encourages everyone to take advantage of leisure time to read a book or watch a movie. This helps to cultivate our sentiment and enrich the lives of employees.