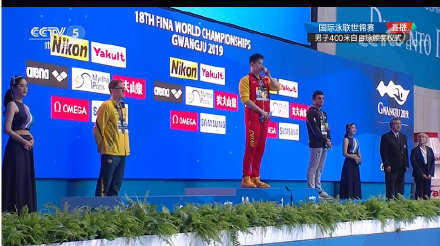 At the 18th FINA, World Swimming Championships in Gwangju, South Korea, the competition for the swimming competition was launched on the 21st, July. In the men's 400m freestyle final, the Chinese athlete Sun Yang, who is on the World Championships for the seventh time, has successfully won the championship with a score of 3:42.44!

After the game, Sun Yang said in the interview: “I have completed this feat at 800m before. Now I have completed four consecutive championships in the 400m project. It should be said that I did first in freestyle swimming. I think this is a certainty for my previous training. I think the first shot is the same for everyone. But in the end, I was biting my teeth. I have trained and I was able to stick to it.”

Horton, who won the second place, did not stand on the podium. After playing the Chinese national anthem, Horton did not take a photo with Sun Yang and the third runner-up. Horton not only lost the game but also lost personality and sportsmanship!

Sun Yang has won the first gold medal in the current Gwangju Swimming World Championships. In the face of Holden’s refusal to stand on the podium after the game, Sun Yang gave a positive response at the post-match conference.

“He wants to influence my play on the track through such a move, but I do what I should do. You can have an opinion on me, but the award is very sacred. Thought you have thousands of unwilling in the heart when you stand on the podium, you have to respect China.”

“You can not respect me, but you must respect China.”

“I know that many people don't like me. But my gold medals are the best fight for them.”

Sportsmanship is not only the leading of technology but also the pattern and cultivation of a person!

Sun Yang once again proved with the strength that he is still the king of the pool!!!